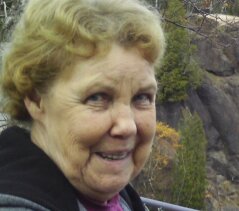 Obituary of June D. Floyd Houghton - June D. Floyd, 77 a resident of Houghton passed awaypeacefully at Portage View Hospital shortly after midnight , April 3, 2017.She was born in Detroit on January 27, 1940, daughter of the lateMartha and Archie Simmons. June's early schooling took place in Detroitand later in the Ewen school system while living at the family farm on HimankaHill Rd. June returned to the Detroit area after school, seeking employmentand worked at Jack & Jill children's clothing . She later moved with herfamily to the Los Angeles area and found work at Hoffman's Candies.After the family returned to Detroit, June relocated to Ewen and met Jim Floydwho she married on October 17, 1964 in Ontonagon.While in Ontonagon, June worked for Don Pattison's Sunshine Motel inSilver City and also did housekeeping for Thompson's Cabins and Kirouac's.June later applied with the CETA program in the late 1970's where she foundwork in Houghton, which included South Range and Dodgeville. AfterCETA was terminating she worked briefly as a nurse assistant at what isnow Our Lady Of Mercy Nursing Home in Hubbell. She also worked at the DowntownerMotel in Houghton and later, was hired for housekeeping at Bob and Jan Wieber'sVacationland Motel near Michigan Tech where she worked for 9 years.She later worked in housekeeping at King's Inn Best Western in downtownHoughton for 13 years until retirement. June was an avid crossword fanaticand flower lover (hens & chickens, African violets and cactus were favorites) andanimal lover.June was preceded in death by her husband Jim Floyd in 2004, and herparents Martha (2007) and Archie (1995) Simmons. Surviving are two sons Jim G.(Jodi) Floyd of Dodgeville, Dan Rosandich of Houghton and dog Barney of Houghton.Services are being held Thursday April 13 th at 11:30 a.m. at the Memorial ChapelFuneral Home in Hancock with Pastor Bucky Beach of Good Shepherd Lutheran Churchand Campus Ministry officiating.Burial will take place at the Lakeside Cemetery in Hancock and June requested anydonations in lieu of flowers be made to either The American Cancer Association,The Omega House of Houghton or The Keweenaw Animal Alliance of Houghton.To view June's obituary or to send condolences to the family please visit www.memorialchapel.net.The Memorial Chapel & Plowe Funeral Homes of Hancock have been assisting the family with the arrangements.Service Information To send flowers to the family of June Floyd, please visit Tribute Store
To order memorial trees or send flowers to the family in memory of June Floyd, please visit our flower store.