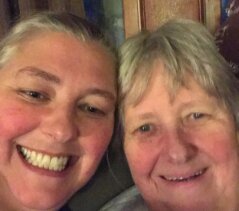 South Range June E. Jenkins, 71, a resident of South Range, passed away Tuesday, March 31, 2020, at the Omega House in Houghton following a battle with ALS. She was born on March 1, 1949, in Hancock, a daughter of the late Aaron and Elsie (Eakin) Luoma. June was raised in Liminga, attended the Redridge School and was a graduate of the Houghton High School. On April 13, 1968, she was united in marriage to Roger Jenkins. The couple raised their 5 children in Painesdale until 1996, when they moved to St. Paul, MN. While in Minnesota June worked as a cook for the Union Gospel Mission and retired from her head cook position at the Wellington Assisted Living facility in St. Paul, MN. Upon retirement, Roger and June returned back to their roots in the U.P. and resided in South Range. June was and active member of the Range Apostolic Lutheran Church, she enjoyed building puzzles, cooking, sewing and spending time with her family and friends. Preceding her in death are her parents, her sister-in-law; Kathy Luoma, Her mother-in-law: Edith Jenkins and her brother-in-law: Harlowe Gougeon. Surviving are: Her husband: Rev. Roger Jenkins Sr. of South Range. Her children: Roger (Dawn) Jenkins Jr. of St. Paul, MN Sam (Joleen) Jenkins of Atlantic Mine Wayne (Cheryl) Jenkins of Pine City, MN Spencer (Carri) Jenkins of Houghton Amanda (Ted) Jenkins-Buegel of West St. Paul, MN 15 Grandchildren, 3 great grandchildren and her furry companion Freeway Her brothers & sister: Leonard Luoma of Toivola Fred (Bev) Luoma of South Range Jacqueline (James Sr.) Brandt of Red Ridge, MI Ken (Jessica) Luoma of Cambridge, MN Numerous nieces, nephews and cousins A memorial service for June will be held 1:00 pm Saturday August 29, 2020, at the Range Apostolic Lutheran Church with Pastor Chuck Bylkas to officiate. Burial will be in the Forest Hill Cemetery at a later date. Friends may call on Friday August 28, 220 from 6 to 8:00 pm and on Saturday from 12 noon until time of services at the Range Apostolic Lutheran Church. All are asked to respect the COVID social distancing guild lines while attending the visitation and service. To view Junes obituary or to send condolences to the family please visit www.memorialchapel.net. The Memorial Chapel & Plowe Funeral Homes of Hancock is assisting the family with the arrangements.
To order memorial trees or send flowers to the family in memory of June Jenkins, please visit our flower store.