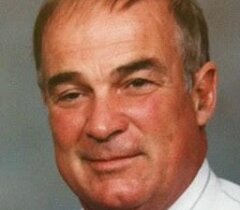 Larry Marlin Julien passed away August 27, 2020 at home in Houghton, Mi with family at his side after a 4 year battle with brain cancer and Parkinsons. Larry was born August 16, 1937 in Nora Springs, Iowa to George and Lorette (Swartwood) Julien. When he was 11 years old, he moved with his family to a farm near Fairchild, Wisc where he lived until he graduated from Fairchild High School in 1955. He then went to college at University of Wisc, Madison before enlisting into the Marine Corp from 1956 to 1958, leaving with the rank of Corporal to return to college. He attended Univ of Wisc, River Falls, earning a BS in Chemistry and Math in 1962. He was Senior Class President; Captain of the Wrestling team, State Champion heavy weight wrestler 3 years and one year runner up, and National Champion wrestling runner up one year; Captain of the Football team and named All Conference Football team his final year. He was contacted by a pro football team inviting him to their team, but decided to continue his education. He was inducted into the first River Falls, Athletic Hall of Fame for both Wrestling and Football. During that time, Larry had 2 daughters, Sandra and Elizabeth from his marriage to Olga (Mazurak) Julien. He went on to grad school at the University of Iowa, Iowa City, where he received his Doctorate in Physical Chemistry in 1966. After graduation, Larry knew he wanted to live and work in the northern Midwest, so he drew a line on a map between Minneapolis and Midland, Mich and applied to teach at 6 colleges that were located north of that line. He visited 5 of those campuses and was given job offers from all 5 of them. He chose Michigan Tech because he was so impressed with students all busy studying in the Student Union. He taught at MTU from 1966 until his retirement in 2000. Classes he taught included Physical Chemistry, Quantum Chem, Statistics, Advanced graduate P Chem, and Freshman Chem classes where he used lots of chemical demonstrations in his lectures. He developed and taught summers Computers for the classroom to High School Science Teachers from across the nation, (when many profs at Tech still did not use computers yet) and volunteered doing after-school science programs at local schools. He served 2 years as president of the University Faculty Senate, he was University Ombudsman, and was Marshal for the MTU graduation ceremonies. Larry enjoyed fishing with all his kids as they grew up, and watching them all in sports, traveling to watch all their games and practices. He was a boy scout leader, a youth soccer and baseball coach, a softball player/coach, excellent bowler and played the NBA for years at Tech (noon basketball). He loved to watch his daughters in track, drill team, cheerleading, and figure skating practices and competitions. He loved to take week-long adventures in canoes to fish the remote rivers of Canada with his friends, and sons when they got old enough to join these trips. He liked living in the country, especially living on Lake Superior for 35 years in a house he and wife Connie built themselves at the end of a long road. Larry was a friend to all he met and was always willing to listen or help them in any way he could; and all his kids agree he was the best dad ever! After retirement, Larry enjoyed 18 holes of golf every weekday morning in the summers and then chatting with friends every morning at downtown cafés in the winter. He and his wife Connie (Thompson) celebrated their 38th wedding anniversary on August 23rd. Larry is survived by his wife, Connie, a brother, Randy (Jane) Julien of Fairchild, Wi and sister Janice Pierce in Menomonie, Wisc. Daughter Sandra (Chuck) in Woodbury, MN who have 3 children, Samantha, Patrick and Jeff Nordeen. Daughter Elizabeth (Dave) in Woodbury, MN who have one daughter, Kimberly Doerr (soon to be a Physician.) Larry married Connie (Thompson) Julien in 1982 and they have two sons. Jason (Tara) who have 2 preschool children, Chase and his sister Charlie Julien in Waukesha, Wisc. Jonathan (Jennifer) have 2 preschool girls, Esrey and Malone in Houghton. A Celebration Of Life for Dr. LarryJulien will be held on Saturday, September 12th at the Michigan Tech Football Field Pavilion (parking in the new lot across from the Tech Trails) beginning at 1 p.m. with a Gathering of Friends and Family and sharing a few words to reflect Larry's life starting at 2 PM (ending by 3 p.m.). In lieu of flowers, the family kindly suggests giftsin memory of Larry could be made toLittle Brothers Friendsof Elderly(Hancock, MI) or to theMichigan Tech Fund(with a memo directing the donation to the Chemistry Dept in Larry's Honor). Social distancing and masks will be required. To view Larrys obituary or to send condolences to the family please visitwww.memorialchapel.net. The Memorial Chapel & Plowe Funeral Homes have been assisting the family.
To order memorial trees or send flowers to the family in memory of Larry Julien, please visit our flower store.