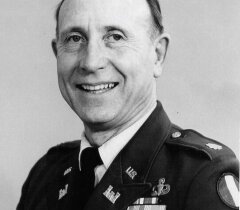 Obituary of Larry Lawrence Houghton Clyde K. Larry Lawrence, Lieutenant Colonel USA Ret., 96, passed away Monday, April 22, 2019 at Portage Pointe in Hancock. He was born June 17, 1922 in Louisville, KY, the second son of William and Mary Lawrence. After graduating from Thornton Fractional High School, Calumet City, Illinois in 1940, he enrolled in the engineering college at the University of Illinois. As a member of the enlisted reserve while in college, he was called to active duty in early 1943. Basic training and further training at Princeton University (Army Specialized Training Program) were followed by a six-month tour of duty in the Pacific theatre of operations. Returning to the States, he was commissioned a Second Lieutenant, Army Corps of Engineers in early 1945. Serving in the Army on extended active duty (except for a 3-year hiatus working as a civilian construction engineer in Germany) for 30 years. His foreign service included tours in Germany, France, Korea, Guatemala, and Vietnam. Military schooling included parachute qualification (master parachutist with 135 jumps), Engineer Officer advanced course, the Army Language School (Spanish) and Command of the General Staff College. Numbered among his decorations are the Bronze Star, the Meritorious Service Medal, the Air Medal, and the Vietnam Cross of Gallantry. He also earned a BS degree at Austin Peay State University and an MBA at Roosevelt University. Home on a short leave, he married his high school sweetheart Betty Jane Railey on July 2, 1943 in Hammond, Indiana. She was his loving and devoted wife for over 58 years. His terminal tour of military duty was served at Michigan Technological University as department head of Army ROTC and Professor of Military Service. He retired in Houghton where he was a past president of the Houghton County Chapter of the American Red Cross and was a member since 1965 and a past president of the Houghton Rotary Club. In 1972, he was employed by Homestake Copper Company in Calumet, MI as Director of Public Relations and Environmental Affairs until mining operations ceased in 1975. Larry was an avid golfer and tennis player, enjoying a great deal of time with his friends and fellow enthusiasts. He also enjoyed sailing his small sailboat on Portage Lake with friends and family members. Colonel Lawrence is survived by: His daughters Susan G. Lawrence of Chassell, Cathy A. Lawrence of Chassell and son Kelley (Becky) Lawrence of Mt Pleasant, MI. His grandchildren Abbey (Kyle) Carlson and their son James Kelley, and Kelsey (Matthew) Brown with their children William and Natalee, and his longtime golfing and bridge partner, Special Friend, Marian Tallman. A memorial service with military honors will be held 4pm Friday, April 26, 2019 at the Memorial Chapel Funeral Home in Hancock. Visitation will be held from 2pm until the time of services at the funeral home. Colonel Lawrence will be interred in the Arlington National Cemetery in Virginia beside his beloved wife Betty Jane who predeceased him on April 4, 2001. In lieu of flowers or other expressions of sympathy, the family asks that donations be made to the American Red Cross or the Omega House in Larrys name. To view this obituary or to send condolences to the family, please visit www.memorialchapel.net. The Memorial Chapel & Plowe Funeral Homes of Hancock have been assisting the family with the arrangements. To send flowers to the family of Larry Lawrence, please visit Tribute Store
To order memorial trees or send flowers to the family in memory of Larry Lawrence, please visit our flower store.