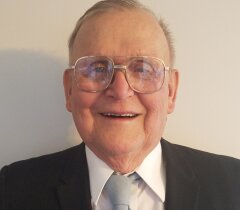 Leo Isaac Mattila of Toivola, beloved husband, father, grandfather, uncle, cousin, and friend, passed from this world on Thursday, September 1 at the age of 84 in Traverse City, MI after a brief battle with bladder cancer.

He was born on July 31, 1938 in Toivola, Michigan, the son of Samuel and Laura (Johnson) Mattila. He was the twelfth of 13 children in the family who lived to adulthood.

Leo attended Heikkinen School and Jeffers High School, graduating in 1956. He was employed by Yalmer Mattila Contracting from the age of 18 until his retirement in 1994. He served in the United States Army from 1961-63 during the Cuban Missile Crisis. One of the things he was proud of was that he and his eight brothers each served in the military and each one came home.

In 1964, he met Marian Marie Verran. After a whirlwind courtship, they were married on September 19 of that year. After living in Houghton the first winter, they moved to their farm in Toivola in 1965, which he affectionately named the Triple M Ranch. They built their own house and raised their family of three children.

Leo is also survived by several sisters- and brothers-in-law, nieces, nephews, cousins, and friends as numerous as the stars.

When Leo walked into a room, he made it a better place. He always had a smile, a laugh, a joke, or story, and he never met a stranger: they were always friends he hadn’t met yet. His positivity was contagious, and his signature “Keep smiling!” was what everyone did when he was around.

The family invites everyone to join them on Sunday, September 18 at the Painesdale United Methodist Church. Visitation will be from 1-4 p.m. Military rites will be at 4 p.m. followed by a Celebration of Life. People are asked to wear blue in honor of Leo’s favorite color and bright blue eyes. Burial will take place in the Toivola Cemetery at a later date.

The family would like to extend thanks beyond words to all the caring staff at Aspirus Health Systems Laurium and Munson Medical Center Traverse City for the compassionate care Leo received during all of his treatments.

“I have fought the good fight, I have finished the race, I have kept the faith.” 2 Timothy 4:7

To view Leo’s obituary or to send condolences to the family please visit www.memorialchapel.net.

The Memorial Chapel Funeral & Cremation Service Mt. View Chapel of South Range has been assisting the family with the arrangements.
To order memorial trees or send flowers to the family in memory of Leo Mattila, please visit our flower store.