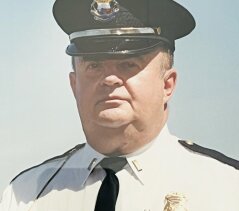 Hancock Louis H. Fredianelli, 82, a resident of Hancock passed away Thursday, January 6, 2022, at the UP-Health Portage Hospital in Hancock following a short illness. He was born on August 12, 1939, in Hancock a son of the late Louis J. and Adeline (Zabolocky) Fredianelli. Louis was raised in Hancock and attended the St. Joseph & St. Patrick Catholic School and was a graduate of the Hancock High School with the class of 1958. While in High School Louis worked as an usher at the Orpheum Theater and as a sales clerk at Joffees Mens Clothing Store in Hancock. Following high school, Louis moved to the Milwaukee area to work for Patrick Cudahy Meat Packing Plant. On May 25, 1963, he was united in marriage to the former Roberta DeCesare. The couple resided in Hancock to raise their family. In 1963, he began a career in Law Enforcement starting with the Hancock Police Department. During this time, he attended the first police schools held at Northern Michigan University and helped drive ambulance for the Jukuri Funeral Home. In August of 1970, he began a career with the Michigan Technological University Public Safety, retiring after 31 years of service as the Lieutenant in June of 2001. During that time at the university, Louie was able to make many wonderful friends with many students and staff and faculty. In retirement, he continued working part-time with the university as security for the board of control and would help part-time with the City of Hancock Police department working parades and special events. He had also helped drive hearse for the Memorial Chapel Funeral Home and driving cars from the Houghton County airport to the Marquette Airport for the car rental business for many years. Mr. Fredianelli was a lifelong active member of the Church of the Resurrection in Hancock where he had been a Eucharistic Minister and usher. He had volunteered with the local St. Vincent DePaul Store and served as president of the Resurrection Conference for 8 years. He also was a member of the Knights of Columbus. Family was always a big part of Louies life. He enjoyed many family vacations with his children and grandchildren. He loved watching his sons and grandchildren play sports even getting to see his great-grandson play hockey this past December. He always looked forward to the family dinners on Sunday to catch up and visit. Louie also had many interests such as music and collecting different items such as 45 records (having over 1400 different records), Hats, Knives, and model cars. No one was a stranger around Louie for long his quick wit, sense of humor and storytelling always made it easy for him to meet new friends. He will be greatly missed by his family and friends. Preceding him in death were his parents, his son Brian, his sister Anita Budweg and most recently his brother James. Surviving are: His wife of 58 years: Roberta Fredianelli; His children: Beth (Dave Hannon) Fredianelli, David (Gina) Fredianelli, Jomarie (Ryan) Wakeham; His daughter-in-law: Sharon Fredianelli; His almost daughter: Carol (David Strang) Wiitanen; His former son-in-law: Gerald Harry; His grandchildren: Dominic (Amy Peterson) Fredianelli, Katie (Jordon Johnson) Fredianelli, Ben (Nikki) Fredianelli, Alan (Nikki) Harry, Robert Harry, Michaela (Gary Dowdell) Harry, Michael (Amanda) Vettori, Evan (Jen) Miner; His great-grandchildren: River Fredianelli, Jameson Johnson, Bryant Johnson, Jinny Johnson, Noah Harry, Gabe Vettori, Annabell Vettori, Geno Vettori, Amber Flaherty, William Flaherty and Jacob Miner; His sister-in-law: Victoria Fredianelli of Hancock; Numerous nieces, nephews and cousins. A Mass of Christian Burial for Louis will be held 11:00 am Friday, January 14, 2021, at Church of the Resurrection in Hancock with Fr. Jubish Joseph to officiate. Spring burial will be in the Forest Hill Cemetery of Houghton. Friends may call on Thursday, January 13, 2022, from 5 to 8:00 pm at the Memorial Chapel Funeral Home of Hancock. In lieu of other expressions of sympathy, the family suggests that memorials be given to the Omega House in Memory of Louis Fredianelli. To view Louies obituary or to send condolences to the family please visit www.memorialchapel.net. The Memorial Chapel Funeral & Cremation Service of Hancock is assisting the family with the arrangements
To order memorial trees or send flowers to the family in memory of Louis Fredianelli, please visit our flower store.