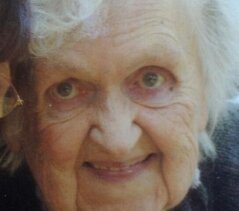 Obituary of Maija H Lindala Chassell Maija Helena Ingeborg Lindala, 88, a former resident of Chassell passed away Sunday, June 5th, 2016 at the Eastwood Nursing Center in Negaunee where she had been a resident for the last month. ?Maija was born on March 28, 1928 in Rauma, Finland. She was the daughter of Franz Wilhelm Linja and Edit Linja (Vahlqvist). She was preceded in death by her husband Walter V. Lindala, also of Chassell, as well as a sister Ellida Linja of Rauma, Finland and a brother Heikki Linja of Muurame, Finland. She is survived by her son Walter M. Lindala (April) of Marquette as well as nieces and a nephew in Finland.? In Finland, during WWII, Maija volunteered in a hospital attending to wounded soldiers, and worked as a bank teller in Rauma. In the early 1960s, Maija was visiting the U.S. to see family and friends and she met Walter Lindala in South Range, MI. The two had a courtship and married in 1963 and made their home on Portage Lake in Chassell. Their only child, Walt Jr., was born a few years later in 1967. Maija was an avid swimmer and cross-country skier and was involved in the Finnish social scene in the Copper Country. Maija and her husband Walt were some of the first guests on Finland Calling on TV6.? Maija and her husband operated Lindys Resort for several decades and she enjoyed interacting with their many visitors. She also liked making Finnish baked goods and having people over for coffee. She was always ready to offer some up when people came to visit.? Maija made many friends later in life after her husband passed in 1992 through the Little Brothers Friends of the Elderly volunteer group. Many of those she came to know through Little Brothers remained her friends for the rest of her life.? Maija lived a quiet and humble life. She kept her bird-feeder filled and liked watching birds outside her window. She was also enjoyed the company of cats. Maija was a fan of Detroit Tiger baseball and Green Bay Packer football. She also enjoyed trips to the casino with her friends as well as hearing her son play guitar in the Flat Broke Blues Band. Some of her proudest moments included being granted U.S. citizenship in 1967 as well as seeing her son graduate from Northern Michigan University. ?In lieu of flowers or other remembrances, the family requests contributions be made to the Upper Michigan chapter of Little Brothers Friends of the Elderly, a non-profit volunteer organization. A Memorial Service for Maija will be held 11 am Saturday June 11, 2016, at Holy Trinity Lutheran Church of Chassell, with Rev. Sally Wilke to officate. Burial will be in the Lakeside Cemetery of Hancock. Friends may call on Saturday June 11, 2016, from 10, am until time of services at Holy Trinity Lutheran Church of Chassell. To view Maija's obituary or to send condolences to the family please visit www.memorialchapel.net The Memorial Chapel & Plowe Funeral Homes of Chassell are assisting the family with the arrangements. To send flowers to the family of Maija Lindala, please visit Tribute Store
To order memorial trees or send flowers to the family in memory of Maija Lindala (Linja), please visit our flower store.