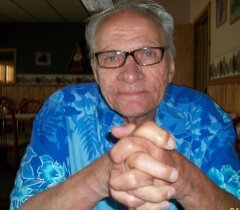 Obituary of Marvin Eugene Luokka Dollar BayMarvin E. Luokka, 82, a resident of Dollar Bay passed away Tuesday morning February 27, 2018, at the Houghton County Medical Care Facility in Hancock where he had been a patient for the past 2 1/2 years. He was born on September 10, 1935, in Houghton, a son of the late Hjalmer and Lempi (Jaakola) Luokka. Marvin was raised on the family farm in Obenhoff and was a graduate of the Jeffers High School with the class of 1954. Marv began working at Broemer Dairy and was a mechanic at Smiths Super Service in Hancock while driving bus for Hancock. He then began his career selling cars for Nelson Motors in Mason before owning and operating Marvs Cars in Dollar Bay until his retirement. Marvs favorites times where spent with his grandchildren and wife. He also enjoyed traveling to areas in Michigan, Illinois, and Wisconsin to look for used cars with his wife & daughter, where he made many friends along the way. He also enjoyed walks with his wife, Sara; rummage sales; coffee with his brother, Melvin; his car business and its customers; and watching the Detroit Lions, Tigers and Red Wings. In his youth, he helped the Bancroft Dairy win the Little League Title. He was also a member of the First Apostolic Lutheran Faith. Preceding him in death were his parents and his step-daughter; Lynn Somero. Surviving are: His wife: Sara Luokka of Dollar Bay His daughter: LeAnn (Jeff) Pulda of Dollar Bay His grandchildren: Brendan, Ellie and Silas His step-son: Kim (Debbie) Wiitala of Calumet His sisters and brothers: Ruth Lindrus of Libertyville, IL Melvin (Florence) Luokka of Atlantic Mine Jean Luokka of Brookfield, WI David Luokka of Swartz Creek, MI Several nieces, nephews and cousinsGood friend, George Este of Hancock, MI Funeral services for Marvin will be held 1 pm Friday, March 2, 2018, at the Memorial Chapel Funeral Home of Hancock with David Tiavalkoski to officiate. Spring burial will be in the Liminga Cemetery. Friends may call on Friday March 2, 2018, from 11 am until time of services at the Memorial Chapel Funeral Home of Hancock. To view Marvins obituary or to send condolences to the family please visit www.memorialchapel.net. The Memorial Chapel & Plowe Funeral homes of Hancock have been assisting the family with the arrangements To send flowers to the family of Marvin Luokka, please visit Tribute Store
To order memorial trees or send flowers to the family in memory of Marvin Luokka, please visit our flower store.