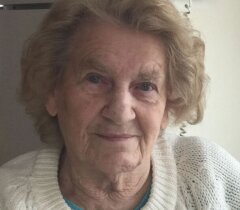 Houghton Canal
Mary Lou Mattila, 93, a resident of the Houghton Canal Road passed away Saturday, October 10, 2020, at Canal View- Houghton County where she had been a resident for the past 11 months.
She was born on March 12, 1927, in Copper City, to the late John and Evelyn (Martin) Eckloff. She was raised in Copper City and graduated from the Calumet High School with the class of 1946.
Following school, Mary Lou worked at the Keweenaw Mountain Lodge. She was united in marriage to Frederick Mattila on November 28, 1947. He preceded her in death on March 8, 2011. Mary Lou and Fred moved to Detroit following marriage and returned to the area in 1954 when they purchased the Skyway Motel and Bar. The couple sold the business in 1963 and moved to Lake Linden for a short time. In 1964-65, they built the Downtowner Motel in Houghton and Mary Lou was the manager/owner/operator of the business until they sold it in 1972. She had also worked as a bookkeeper for a bulldozing business that she and her husband owned and operated. In 1977, the couple built a house on Houghton Canal Road where Mary Lou was a homemaker and enjoyed spending time with her family, especially her grandchildren. She looked forward to family gathering at her house for lunch every day.
Mary Lou especially enjoyed puzzle building where most recently, she would work on them from day until night. She also enjoyed playing pinocle and dominoes, sewing, crocheting, shoveling snow, snowmobiling in her younger years, and watching the birds and squirrels outside. She looked forward to Labor Day and Memorial Day where her family would host chicken BBQ’s because she was able to spend time with everyone in the family.
Besides her parents and her husband, Mary Lou was preceded in death by her son Rod, son-in-law Em Medlyn, her siblings; Pat Sager, Robert Eckloff, Clarence Eckloff, Delores Bishop, and Barb Kaifesh.
Surviving are her daughters: Shari Ringler of Houghton
Starr Medlyn (Gerry) of New Richmond, WI
Penny Mattila (Tim) of Atlantic Mine, and daughter-in-law, Pam of Houghton Canal Road
Her grandchildren: Jay(Peggy), Jo’el(Mike), Shane, Sydney, Adam, Corey, Melissa, Bruce(Kristine), and Zoey(Dell).
Her great-grandchildrem: Cam, Nick, Cody, Taylor, Brady, Gabe, Jerry, Emilee, Zarah, Amir, and Ryan.
Her siblings; Donald (Elaine) Eckloff, Bill (Jean) Eckloff, Dorothy Cass, Carol (Jesse) Holbrook, and Jeepie (Al) Laumann.
Numerous nieces, nephews, and cousins.
The family would like to thank the staff at Canal View-Houghton County for always making Mary Lou smile and making her feel at home.
A private graveside service for Mary Lou will be held in the Lakeview Cemetery of Calumet.
To view this obituary or to send condolences to the family, please visit www.memorialchapel.net.
The Memorial Chapel & Plowe Funeral Homes of Hancock is assisting the family with the arrangements.
To order memorial trees or send flowers to the family in memory of Mary Lou Mattila (Eckloff), please visit our flower store.