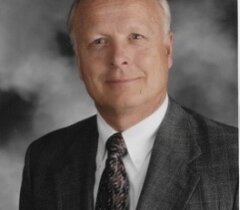 Hancock Max O. Curtis, 75, a resident of Hancock passed away Friday, February 28, 2020, at the Medora House of Portage Pointe in Hancock where he had been a resident patient for the past four years. He was born on April 13, 1944, in Caro, MI, son of the late Royce and Maxine (Moulton) Curtis. Max was raised in Caro and Jackson, MI. He was a 1962 graduate of Jackson High School. He then attended Michigan Technological University where he received his degree in Mechanical Engineering. On November 26, 1965, he was united in marriage to the former Mary Maloney. Mr. Curtis then began a career working for Upper Peninsula Power Company, working on various projects in the company, most notably being the rebuild of the Victoria Dam. He retired after 34 years. Max enjoyed spending time with his family and working on projects around his home. He was very active in coaching with Copper Country Junior Hockey and enjoyed helping his neighbors with various projects. Preceding him in death were his parents, his brother Albert and two nephews Steven and Alan. Surviving are: His wife: Mary Curtis of Hancock His children: Todd Curtis of Stewartville, MN Tracy Neumeier of Ft. Wayne, IN Tim (Aimee) Curtis of Superior, WI Tyler Curtis of Milwaukee, WI Trevor Curtis of Hunting Beach, CA His brother: Edward (Barbara) Curtis of Fort Lauderdale, FL A special sister in law: Paulette Maloney of Wind Lake, WI 9 grandchildren Numerous nieces, nephews and cousins A private memorial service for Max will be held at the Memorial Chapel Funeral Home of Hancock with Rev. Laura Eaton to officiate. A time to remember and visit for Max will be held October 10, 2020, from 2 pm to 4 pm at the Memorial Chapel Funeral Home in Hancock. To send condolences to Maxs family, please visit www.memorialchapel.net. In lieu of flowers, the family welcomes donations in his memory to the Copper Country Junior Hockey Association or the Michigan Tech football program. The Memorial Chapel & Plowe Funeral Homes of Hancock are assisting the family with the arrangements.
To order memorial trees or send flowers to the family in memory of Max Curtis, please visit our flower store.