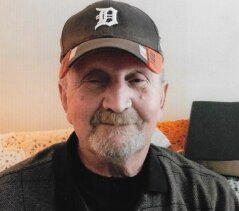 Hand delivered by a local florist

Michael R. Manninen, 68, a resident of Dodgeville, entered his heavenly home on Wednesday, September 14, 2022, with his family by his side.

Mike was born on November 4, 1953, in Hancock, to the late Rudolph and Virginia (Telin) Manninen. He was raised in Dodgeville and attended the Houghton Schools. At age 18, He enlisted with the United States Marine Corps. He trained at Camp Pendleton and was then stationed in Okinawa, Japan.

In Mike’s younger days, he played Jr. Hockey and played Little League baseball and slow-pitch for Karvakkos. When he was older, he played in the Twilight League, hitting well over 300 at age 40 which meant a lot to him. He also played for the Toivola Tigers and managed other teams. Mike also played in the Copper Country Oldtimer’s Hockey League.

Mike was a die-hard fan of the Detroit Red Wings, Tigers, and the Green Bay Packers. He had a lot of knowledge about sports and the respective players. Mike enjoyed the outdoors being an avid deer and bird hunter and fisherman. He spent a lot of time out in the woods and on the lakes fishing and hunting. Some of his fondest memories are spending time with his son Michael “Michigan Mannu” and nephew Stevie on rivers brook trout fishing. He also enjoyed the Petsamo camp and the Twin Lakes camp with his family and friends.

Mike was employed at Somero Enterprise and retired after 22 years. Mike was a member of the Marine Corp League 1016, the Copper Country Veteran’s Association, American Legion Post 186, and the Lake Superior Beagle Club, and was an original member of the Superior Search and Rescue Team.

Besides his parents, Mike was preceded in death by an infant sister Karla Jean Manninen.

The family would like to thank Dr. Khaira, Audrea Williams, Dr. Liston, Melissa, and Penny in Infusion, and RNs Melanie and LeAnn.

A funeral service for Mike will be held at 3 pm on Saturday, September 24, 2022, at Gloria Dei Lutheran Church in Hancock with Rev. Brahm Semmler Smith to officiate. Burial with military honors will take place in the Atlantic Mine Cemetery.

Friends may call on Friday, September 23, 2022, from 5 to 8 pm at the Memorial Chapel Funeral Home in Hancock and again on Saturday from 2 pm until the time of service at the church.

To view this obituary or to send condolences online, please visit www.memorialchapel.net.

The Memorial Chapel Funeral and Cremation Service – Hancock Chapel is assisting the family with the arrangements.
To order memorial trees or send flowers to the family in memory of Michael Manninen, please visit our flower store.