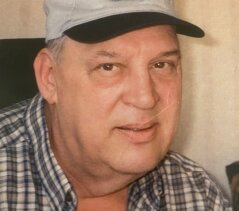 Hurontown Michael A. Zerbst, 77, a resident of Hurontown, passed away peacefully with his family by his side Monday evening December 7, 2020, at the Omega House in Houghton following a lengthy illness. He was born on April 26, 1943, in Houghton, MI, a son of the late Fred and Ida (Kangas) Zerbst. Mike was raised in Houghton and was a graduate of the Houghton High School. Following school, Mr. Zerbst worked for Northern Propane and then for Herman Gunlach Contracting where he was the manager of the Concreate plant/Copper County Concrete and the warehouse until its closure. He then worked until retirement for the Portage Township Schools in the Maintenance/Bus Driving Department. In retirement, Mike would work part-time for R&A driving bus for sporting events for the school. On August 17, 1968, he was united in marriage to the former Patricia Kalcich. The couple resided in Hourontown where they raised their three children. On October 17, 2003, Patricia preceded Michael in death. Mr. Zerbst was an avid fan of most sports but especially followed Hockey. As a child, he was proud to have been on the east Houghton Hockey team that won the nationals in Boston in 1956. He was an avid Redwing Hockey fan. Preceding him in death were his wife; Patricia, his parents, his sisters; Katherine, Florence, Shirley, and Helen and his brothers: Fred, John, Robert, Raymond, Dennis, James, David, Donald. Surviving are: His children: Lisa Zerbst of South Range Mike (Laura) Zerbst of Atlantic Mine Mark (Misty) Zerbst of Tapiola His grandchildren: Tony, Matthew, Jacob, Jeremy, Gavin & Ella His step-grandchildren: Tori, and Taylor His In-laws: Beth Zerbst Raymond and Sandy Kalcich James and Linda Kalcich Numerous nieces, nephews, and cousins A prayer service for Michael will be held 7 pm Friday, December 11, 2020, at the Memorial Chapel Funeral Home of Hancock with Fr. Corbin Eddy to officiate. Spring burial will be in the Forest Hill Cemetery of Houghton. Friends may call on Friday from 5 pm until time of services at the Memorial Chapel Funeral Home of Hancock. All attending the visitation and or service are asked to follow proper social distancing guidelines. To view Mike's obituary or to send condolences to the family please visit www.memorialchapel.net. The Memorial Chapel & Plowe Funeral Homes are assisting the family with the arrangements.
To order memorial trees or send flowers to the family in memory of Michael Zerbst, please visit our flower store.