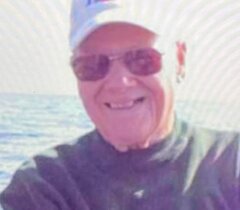 Ontonagon Norman W. Legault, 92, a resident of Ontonagon passed away Saturday August 8, 2020, at the Garden View Assisted Living Facility in Calumet where he had been a resident since this past June. Norman was born on April 17, 1928, in Gladestone, MI a son of the late Wallace and Ruth (Larson) Legault. He resided in Gladestone until enlisting in the United States Navy where he served for hree years. On February 18, 1950, he was united in marriage to the former Marie Raymaker. The couple resided in Racine, WI and Norman worked as a mechanic. The couple then moved to make their home in Ontonagon and Norman began a career working for White Pine Copper Mine retiring as a welder. In retirement Mr. Legault worked part time for Inland Service and Hawley Lumber. Norman was a long time member of the Ontonagon Eagle Club and was an avid fisherman. Preceding him in death were his wife Marie on February 16, 2014, his son David, his sister Audrey Stackowitz and his brothers; Jim, Ray and Bob. Surviving are: His children: Thomas (Cindy) Legault of Ontonagon Cathine (Raymond) Broemer of Ontonagon Daniel (Sue) Legault of Danville, KY Donna (Tom) Danielson of Woodbury, TN His daughter-in-law: Jayne Legault of Ontonagon 15 grandchildren and numerous nieces, nephews and cousins His sister: Muriel Hughes of Escanaba A graveside service and blessing with military honors will be held at a later time at the Holy Family Cemetery in Ontonagon. To view Normans obituary or to send condolences to the family please visit www.memorialchaep.net. The Memorial Chapel & Plowe Funeral home of Hancock is assisting the family with the arrangements.
To order memorial trees or send flowers to the family in memory of Norman Legault, please visit our flower store.