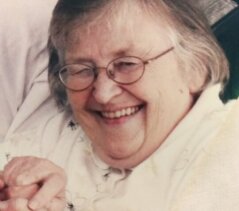 Obituary of Patricia Anne Anderson Houghton Patricia A. Anderson, 82, a resident of Houghton went to be with her Lord on Sunday morning December 2, 2018, shortly after being admitted to the UP Health Portage Hospital. She was born on September 18, 1936, in Houghton. She was the daughter of the late Eugene and Helen (Woods) Sullivan. Pat grew up in Houghton and was a graduate of the Old Houghton High School. In her younger years, Pat worked for the Lode theater and Hamar and Quant Building Supplies in Houghton before becoming united in marriage to James E. Anderson on August 18, 1956. The couple then resided in various parts of the country such as El Paso, TX, Waukesha & Milwaukee, WI and Anchorage, AK while James was in the service. When James retired, he and Pat made their home in Chassell, where they continued to raise their eight children. For the past twenty-five years, Patricia has made her home back in Houghton where she grew up. Pat loved her Catholic faith and was a member of St. Ignatius Loyola Catholic Church of Houghton. She had worked locally as a Caregiver for various people in the Houghton and Chassell area. She also worked at Jims II, the Stanton House and St. Vincent DePaul before retiring due to health reasons. Preceding her in death were her parents, her sister Mary Margaret Cornish, her infant grandson Shawn Anderson, her former husband James Anderson, her son-in-law Brian Fredianelli and very good friends through high school and beyond Sammi (Sharon) Maki & Bixie (Delores) Stewart. Surviving are: Her children: Karen (Michael) Patterson of Hancock Stephen (Wanda) Anderson of Iron Mountain Sharon Fredianelli of Hancock Susan Slayton of Houghton Katherine (Robert) Vogt of Kingsford David Anderson of Kingsford Timothy Anderson of Houghton Mary (Craig) Solmonson of Hancock Her grandchildren: Travis Pearce, Andrew Kertu, Courtney Kerttu, Dominic Fredianelli, Kathryn Fredianelli, Rebecca Anderson, Patricia Whitman, Benjamin (Nikki) Fredianelli, Brianna Whitman, Meagan Solmonson, Kayla (Ely) Rounavaara, Blake Patterson, Emily Anderson, Allie Anderson, Connor Solmonson 11 Great-grandchildren and several Special nieces and nephews A Mass of Christian Burial for Patricia will be held 11:00 am Friday, December 7, 2018, at St. Ignatius Loyola Catholic Church in Houghton with Fr. John Martignon to officiate. Spring burial will be in the Forest Hill Cemetery of Houghton. Friends may call on Friday, December 7, 2018, from 10:00 am until 10:45 am at St. Ignatius Loyola Catholic Church in Houghton. To view Patricias obituary or to send condolences to the family please visit www.Plowefuneralhome.com The Memorial Chapel & Plowe Funeral Homes of Houghton are assisting the family with the arrangements. To send flowers to the family of Patricia Anderson, please visit Tribute Store
To order memorial trees or send flowers to the family in memory of Patricia Anderson (Sullivan), please visit our flower store.