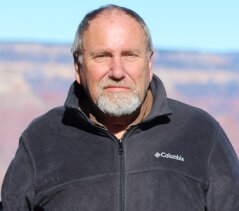 Big Traverse Bay Paul Keskimaki, 68, a resident of Big Traverse Bay and former Chassell resident passed away Saturday, August 14, 2021, at his home following a short illness. He was born on February 5, 1953, in Marquette, MI, a son of the late Arnold and Helen (Maki) Keskimaki. Paul was raised in Chatham and was a graduate of the Eben High School with the class of 1971. He then attended Northern Michigan University. On October 8, 1983, he was united in marriage to the former Susan Pietila. Paul had been employed by UPS for over 30 years. During that time the couple had resided in Marquette, Kingsford, Houghton, and Chassell. Mr. Keskimaki retired in 2002 after being the business manager for the Houghton Hub for UPS. In 2015, they decided to move to the family cottage in Big Traverse to make it their year-round home. Mr. Keskimaki was a member of the First Apostolic Lutheran Church of Houghton. He enjoyed spending time with his family and friends. Preceding him in death were his parents, his brother Mike, his nephew Darin Keskimaki, his father-in-law Art Pietila, and his brother and sister-in-law; Gary and Pam Pietila. Surviving are: His wife: Susan Keskimaki of Big Traverse His children: Amy (Dan) Rautiola of Negaunee Sara (Lars) Hyrkas of Traprock Valley Beth Keskimaki of Marquette Maria (Tom) Parks of Negaunee Jennie (Steve) Koivisto of Cokato, MN Eric (Kelly) Keskimaki of Lake Linden Jill Keskimaki of Kiel, WI Lisa (Will) Hyrkas of Mohawk Samuel Keskimaki of Big Traverse His grandchildren: Janelle, Avery, Tyler, Kelsey, Kiira, Brooke, Mason, Lila, Theodore, Jack, Carly, Caroline, Paul, Eleanor, Rowan, Adelyn and Niko His brother: Alan (Kathy) Keskimaki of Capac, MI His mother-in-law: Ruth Pietila His brothers & sisters-in-law: Jeffrey (Tamara) Pietila of Chassell Roger (Ginny) Pietila of Howell Connie (John) Hendrickson of Cokato, MN Keith Pietila of Byron, MI Richard (Christine) Pietila of Howell Barbara (Dave) Pennala of Howell Karen (Lowell) Skoog of Menahga, MN Kenneth (Liz) Pietila of Howell Janet (Allen) Tolkkinen of Howell Kevin (Jenny) Pietila of Menahga, MN Ronald (Leslie) Pietila of Howell Kurt (Michele) Pietila of Howell Mark (Rebecca) Pietila of Howell Numerous nieces, nephews and cousins. A funeral service for Paul will be held at 11 am Wednesday, August 18, 2021, at the First Apostolic Lutheran Church of Houghton with David Taivalkoski to officiate. Burial will be in the Atlantic Mine Cemetery. Friends may call on Tuesday, August 17, 2021, from 3 to 7:00 pm at the First Apostolic Lutheran Church of Houghton and on Wednesday from 10 am until the time of services at the church. To view Pauls obituary or to send condolences to the family please visit www.memorialchapel.net. The Memorial Chapel Funeral Home of Hancock is assisting the family with the arrangements.
To order memorial trees or send flowers to the family in memory of Paul Keskimaki, please visit our flower store.