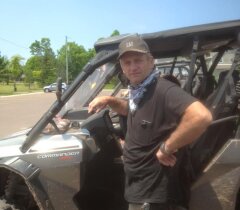 Obituary of Richard Michael Beauchamp Atlantic Mine Richard M. Beauchamp, 58, a resident of Atlantic Mine, passed awayFridayafternoon October 6, 2017, at his home with his family by his side following a lengthy illness. He was born on September 21, 1959, in Hancock a son of Marjorie (Harvey) Beauchamp and the late Francis Beauchamp.Richard attended the Hancock and Dodgeville schools and was raised in Dodgeville. Mr. Beauchamp enjoyed working on cars and had worked repairing cars at his own garage for many years.He also enjoyed being outdoors riding his Harley, snowmobiling, flying gas powered model planes that he built, and as of last few years riding his side by side with family and a special group of friends.He was very handy having built dune buggies and restored a '69 Chevy Camaro.He was an active person from an early age, traveling across the United States as a young man to see what was out there. When he was 28 years old he met his life partner Susan Kowalski and the two have been together ever since raising two children together. Surviving are: Susan Kowalski of Atlantic Mine Their children: Cindy (Brian OConnell) Beauchamp of Dodgeville RJ (Cora Stockton) Beauchamp of Dodgeville His granddaughter: Iris Rose OConnell His mother: Marjorie Harvey a resident at the Houghton County Medical Care Facility His brothers & sisters: Frank (Sandy) Beauchamp of Dodgeville Christine Beauchamp of Tapiola Jeff (Staci) Beauchamp of Dodgeville Karen (Fred) Berryman of Calumet Numerous aunts, uncles, nieces, nephews, and cousins Services for Richard will be held1 pmThursday, October 12, 2017, at the Memorial Chapel Funeral Home of Hancock with Fr. John Martignon to officiate.Burial will be in the Forest Hill Cemetery of Houghton. Friends may call onThursday, October 12, 2017, from11 amuntil time of services at the Memorial Chapel Funeral Home of Hancock. To view Richard's obituary or to send condolences to the family please visitwww.memorialchapel.net. The Memorial Chapel & Plowe Funeral Homes of Hancock have been assisting the family with the arrangements. To send flowers to the family of Richard Beauchamp, please visit Tribute Store
To order memorial trees or send flowers to the family in memory of Richard Beauchamp, please visit our flower store.