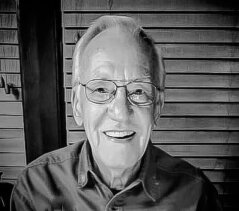 Fall Creek, WI Robert James Bob Meyers of Fall Creek, Wisconsin passed away suddenly on Friday, January 31, 2020. Bob was born at home in Hurontown, Houghton, Michigan on November 15, 1939, the son of Lloyd and Effie Johnson Meyers. He graduated from Houghton High School in 1958 and Michigan Technological University in 1962. Bob was a loving father, grandfather, son, and brother. He is survived by his children: Jennifer (Robert) Butcher, Martin (Jeri) Meyers, Amy (Kenneth) Shear, and Jill (Timothy) Bonk; grandchildren Emma and Sophia Butcher; Bryce, Makenzie, Logan, Connor, and Jenna Meyers; Matthew, Nathan, and Sarah Shear; and Katheryn, William, Grace and Samuel Bonk. He is also survived by his sisters Carol Karppinen and Mary Jane (Butch) Ojala; brothers Donald (Carm) Meyers, Norman (Diana) Meyers, John Meyers, and Ted (Jeanne) Meyers; sisters in law Maureen OConnor Genel and Joni Meyers, as well as numerous nieces, nephews, relatives, and friends. He is further survived by his beloved dog and constant companion, Max. Bob was preceded in death by his wife, Margery OConnor Meyers; his parents Lloyd and Effie Meyers; sister Marlene Mentink; brothers Willard, William, and Lloyd Buto Meyers; and in laws Benjamin Mentink, Nancy Perala Meyers, Ronald Karppinen, and Frederick Genel. Bobs profession as an insurance adjuster for GAB Robins took him to many places as he and Margery raised a family. Most of the years were spent raising a family in Hartland, WI. Nearing retirement, Bob was offered a position in Eau Claire, WI where he had begun his career as an adjuster. Margery and Bob were open to this move and spent their last years in Fall Creek, WI being active members of their neighborhood and community. Margery and Bob had excellent neighbors who were always kind and inviting, especially in the later years after Margerys passing. Bob loved trips back to his home town of Houghton, MI, being in the fields and woods with Max, watching his beloved Badgers, Lions, and Tigers play ball, and watching his grandchildren play sports when he got the chance. He was most proud of his grandchildren. A graveside service will take place 11 a.m. on June 26, 2020 at Forest Hill Cemetery in Houghton, Michigan. A memorial will be established in his name.
To order memorial trees or send flowers to the family in memory of Robert Meyers, please visit our flower store.