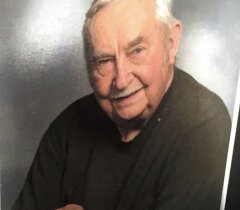 Bob, the second of three sons of Raymond and Amelia Norkol, was born on December 2, 1935, in Hancock where he grew up and graduated from Hancock Central High School in 1954. Bob played hockey at the Hillside Athletic Club outdoor rink and frequented the local hangout throughout his high school years. It was there he met his soon-to-be wife, Vi Wakeham, when they were both teenagers.

In the late 1950s, he was drafted into the United States Army, where he trained in El Paso, Texas, and was stationed in Stockheim, Germany.. Bob was fond of his time in Germany, enjoying the food and Oktoberfest festivities.

When he returned from Germany, Bob began his career as a union electrician and was a member of the International Brotherhood of Electrical Workers for nearly 60 years.

With the help of his two brothers, Bob built his home of 52 years on the Hancock Canal where he and Vi raised their family. A proud Finnish-American, Bob was sure to include two saunas on the property.

Bob was a lifelong hockey fan. He grew up playing at the Hillside Ice Rink and in the local junior leagues. He enjoyed following the Detroit Red Wings and the Hancock Bulldogs hockey teams. All three of his sons played hockey with him behind the bench, and all six of his grandchildren were taught to skate at an early age.

Both in his career and through his hobbies, Bob led by example and instilled a nose-to-the-grindstone attitude in his family members. His hard work lasted long past his time on the job. He never really stopped working.

A frugal man, Bob preferred to fix everything himself and was the go-to handyman for the entire extended family. Any relatives building a deck, sauna or addition to their house could count on his help — often without needing to ask.

Well into his 80s, Bob could be seen cutting, chopping and stacking wood for his beloved wood pile. Bob also crafted cedar chests and bookshelves for his family that will remain in their homes as a reminder of him and of the value of a little elbow grease.

Bob was preceded in death by his parents, Raymond and Amelia Norkol (née Mattila); and brothers, Ronald and Alden “Hank” Norkol.

The family would like to extend special thanks to Bob’s sister-in-law Myrna Gondek for the extraordinary care and attention given to Bob during his later years.

To view Bob's obituary or to send condolences to the family please visit www.memorialchapel.net.

The Memorial Chapel Funeral & Cremation Service - Hancock Chapel has been assisting the family with the arrangements.
To order memorial trees or send flowers to the family in memory of Robert Norkol, please visit our flower store.