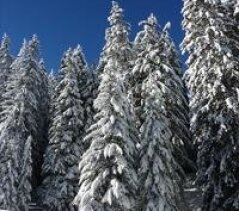 Obituary of Robert William Ruonavaara Kalispell, MT Robert William Ruonavaara, 101, of Kalispell, Montana passed away in the early hours on January 13, 2018. Robert was born on August 3, 1916 in Jacobsville, Michigan, a son of the late Nils and Hilda (Muonio) Ruonavaara. He lived in Jacobsville until his father died in 1920. Then his mother moved the family to Hancock, Michigan. He lived in Hancock until August 2004 when he moved to Kalispell, Montana. Robert attended the Hancock Schools until the eleventh grade. Robert was a veteran, having served in the U.S. Army Air Corp from February 11, 1942 til December 28, 1945 during WWII. On January 23, 1943, he was united in marriage to the former Anna Irene Halberg, she preceded him in death on December 20, 1975. Later Robert married Janet Arline Jouppe on May 12, 1979 in Calumet, Michigan, she preceded him in death on October 28, 1989. Robert worked at the Vienna Bakery in Calumet, and was a carpenter most of his life. Robert was a lifelong member of the Old Apostolic Lutheran Church. Preceding him in death are his wives, his parents, his brother Walter (Arnold) Ruonavaara, his sister Flora Hendrickson and Elma Eloranta, two children Ethel Ritola and Robert Ruonavaara, two grandchildren Tonya Levanen and Evan Wisti and one great grandchild Lineesa Abernathy. Surviving are his children Elaine(Gunnar) Ek of Battle Ground, WA, Nils(Christine) Ruonavaara of Atlantic Mine, MI, Annette(Steve) Levanen of Hancock, MI, Anita(Dennis) Jouppe of Hancock, MI, Linda(John) Wisti of Lonepine, MT, Lillian(Daniel) Macfarlane of Kalispell, MT, Juanita(Scott) Reddig of Kalispell, MT, Marie Ruonavaara of Kalispell, MT and David(Lacey) Ruonavaara of Woodland, WA; One son in law Irvin Ritola of Yacolt, WA; one daughter in law Ingrid Milbrandt of Kalispell, MT; 91 grandchildren, many great grandchildren and great-great grandchildren, nieces, nephews and a host of Christian friends. A visitation will be held from 6-8 PM on Tuesday January 16, 2018 at the Old Apostolic Lutheran Church in Lakeside. Funeral services will be held at 1 PM Wednesday January 17, 2018 at the Old Apostolic Lutheran Church in Lakeside with a viewing 1 hour prior to service. Spring burial with military honors will take place at 11:00 am Thursday, May 17, 2018, at the Lakeview Cemetery in Calumet, Michigan. To view Roberts obituary or to send condolences to the family please visit www.memorialchapel.net. The Memorial Chapel & Plowe Funeral Homes of Hancock are assisting the family with the local arrangements. To send flowers to the family of Robert Ruonavaara, please visit Tribute Store
To order memorial trees or send flowers to the family in memory of Robert Ruonavaara, please visit our flower store.