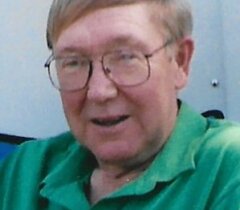 Painesdale Ronald P. Saari, 77, a resident of Painesdale, passed away Tuesday, December 7, 2021, at UP Health Portage Hospital following a lengthy illness. He was born on January 11, 1944, in Hancock, MI, a son of the late Ronald Y. and Edna I. (Pyhtila) Saari. Ron was raised in Winona. He attended the Winona school and was in the first class from Winona to graduate from Jeffers High School with the class of 1961. Mr. Saari was a veteran having served with the US Naval Reserves and the US Navy during the Viet Nam War aboard the USS Intrepid. Following the service, Ron began a career as a heavy equipment operator working for Wilbert Poyhonen Logging, at the King Phillip Mine in Winona, Hocking Contracting, Thornton Contracting and Bacco Contracting until health issues forced an early retirement. On October 28, 1975, he was united in marriage to the former Maria Pindral. The couple resided in Painesdale and celebrated 46 years of marriage. Mr. Saari was a member of the Houghton Baptist Church, a Life member of Ranges Post #6165 VFW of South Range, and the NRA. He enjoyed working in his flower and vegetable gardens, was an avid outdoorsman hunting & fishing and enjoyed following the Detroit Lions. Preceding him in death were his parents, his brothers Kenneth Saari and Robert (Patty) Saari; his nephew Jeff Saari, his sister-in-law: Rita Saari; and his great-niece Kori LaFernier. Surviving are: His wife: Maria Saari of Painesdale; His daughter: Carol Saari of Painesdale; His step-children: Joe (Sue) Sergey of Painesdale, Jeff Sergey of Marquette, Deborah Sergey-Gagnon of Dodgeville, & Richard Sergey of Richmond, MN; 6 step-grandchildren and 7 step-great-grandchildren; His brothers & sisters: Donald Saari of White Pine, Patricia (Bruce) Racine of Rockland, David (Colleen A.) Saari of Winona, Richard (Cheryl) Saari of Greenland, Elizabeth (Dan) Bowling of Ishpeming, Barbara (Gary) Short of Iron River, MI, & Steven (Denise) Saari Ulm, MN; His uncle: Glenn (Shirley) Pyhtila of Hancock; His in-laws: Colleen G. SaarI of Winona, Kaz Pindral of Painesdale, Chester (Debbie) Pindral of Painesdale, Walter (Janie) Pindral of Painesdale, Christine Snell of Painesdale; Numerous nieces, nephews and cousins; His good friends: Gary Koponen and Robert Meneguzzo A memorial service for Ron will be held 2:00 pm Monday, December 13, 2021, at the Memorial Chapel Funeral Home of Hancock. Spring burial will be in the Mt. View Cemetery of South Range. Friends may call on Monday, December 13, 2021, from 1:00 pm until time of services at the Memorial Chapel Funeral Home. To view Rons obituary or to send condolences to the family please visit www.memorialchapel.net. The Memorial Chapel Funeral and Cremation Service of Hancock has been assisting the family with the arrangements.
To order memorial trees or send flowers to the family in memory of Ronald Saari, please visit our flower store.