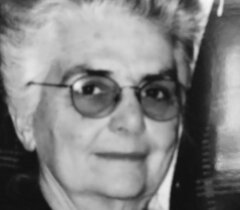 Obituary of Rosa Maria Waatti Hancock Rosa Maria Waatti, 87, a resident of Hancock passed away Tuesday morning August 28, 2018, at the Delaware House of Portage Pointe in Hancock where she had been a resident patient for the past four years. She was born on July 20, 1931, in Royal Oak, MI, a daughter of the late Carmine and Theresa Marie (Turco) Abbate. Rosa was raised in Center Line, MI and was a graduate of the Busch High School with the class of 1949. Rose had worked various jobs in the Detroit area and on November 6, 1954, was united in marriage to Donald Waatti. The couple resided in the Detroit area until 1961. They then moved to the Copper Country, first residing in Ripley where they raised their seven children. Since 1989, they had made their home in Hancock. On July 9, 2013, Don preceded Rosa in death. Mrs. Waatti was a member of the Old Apostolic Lutheran Church of Hancock. Rosa had retired from the Houghton County Medical Care Facility in Hancock where she had worked as a cook. Preceding Rosa in death were her husband, Don, her parents, her brothers Michael and Edward and her grandson Rodney. Surviving are: Her children: Matt (Gail) Waatti of Kalispell, MT Theresa (Willis) Sasse of Kalispell, MT Tim (Lisa) Waatti of Dollar Bay Barry (Rita) Waatti of Woodland, WA Todd (Cherie) Waatti of Battle Ground, WA Sam (Molly) Waatti of Battle Ground, WA Jerome (Leah) Blakeman of Marengo, WI 45 grandchildren and a large number of great-grandchildren Her sister: Lucille (Robert) Belhorn of Gladwin, MI Her sister-in-law: Lois Abbate of Midland, MI Numerous nieces, nephews and cousins Funeral services for Rosa will be held 12 noon Friday, August 31, 2018, at the Old Apostolic Lutheran Church of Hancock with Douglas Wuebben to officiate. Burial will be in the Waasa Cemetery. Friends may call on Friday, August 31, 2018, from 10:30 am until time of services at the Old Apostolic Lutheran Church of Hancock. To view Rosas obituary or to send condolences to the family please visitwww.memorialchapel.net. The Memorial Chapel & Plowe Funeral Homes of Hancock are assisting the family with the arrangements. To send flowers to the family of Rosa Waatti, please visit Tribute Store
To order memorial trees or send flowers to the family in memory of Rosa Waatti (Abbate), please visit our flower store.