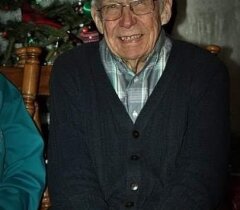 Obituary of Roy Leonard Harju Arcadian Location Roy L. Harju, 89, a resident of Arcadian Location, passed away Friday morning May 5, 2017 at the Omega House after a battle with cancer. Mr. Harju was born on December 7, 1927 in Arcadian Location and attended the Arcadian School. He worked on the family farm and was a delivery man for the Copper Country Dairy. Mr. Harju was a veteran and served two different times with the U.S. Army as a Military Police Officer, once after WW2 and again during the Korean War. He had also served with the U.S. Coast Guard. On March 3, 1951 he was united in marriage to the former Mildred Koykka. The couple resided in Detroit and Hazel Park before returning to make their home on Airport Park Road in 1981. Mildred preceded Roy in death on March 8, 2001. While residing in lower Michigan, Roy worked at Excello Corporation and retired after 34 years. Roy was a very good handyman who enjoyed antique car and tractor restoration, gardening, and could fix almost anything needing repair. In his free time he enjoyed helping some of the local dealerships with transporting cars to different locations. He also was a life member of Bay VFW Post #6028 of Dollar Bay. Preceding him in death were his wife, his parents, and 12 brothers and sisters. Surviving are: His daughter Sherri (Mark) Manninen of Union, IL His grandchildren: Steven, Lauren, and Michael Manninen Several nieces Funeral services for Roy will be held at 11 am on Wednesday, May 10, 2017 at the Memorial Chapel Funeral Home of Hancock with Pastor Jesse Aho of Zion Lutheran Church to officiate. Burial will be in the Lakeside Cemetery of Hancock. Friends may call on Wednesday, May 10, 2017 from 9:30 am until the time of services at the Memorial Chapel Funeral Home of Hancock. Memorial contributions can be made to Omega House, 2211 Maureen Lane, Houghton, MI 49931.Service Information To send flowers to the family of Roy Harju, please visit Tribute Store
To order memorial trees or send flowers to the family in memory of Roy Harju, please visit our flower store.