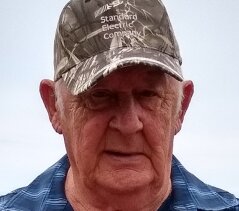 HoughtonRoy D. Mattson, 77, a resident of the Superior Road in Houghton, passed away at home with his family by his side on Friday, December 17, 2021, following a short illness.He was born on November 18, 1944, in Hancock, to the late Henry and Ida (Salmi) Mattson. Roy was raised in Hurontown and attended Houghton Schools.On July 31, 1965, He was united in marriage to the former Carolyn Carlson. Roy word for C&H and Superior Meat in Dollar Bay for a short time before beginning his career at the Houghton County Road Commission where he worked until an injury forced an early retirement. He enjoyed hunting, fishing, and everything outdoors.Besides his parents, Roy was preceded in death by his daughter Kathy Helms, his brothers Robert and Ronnie, and sisters Delores Nelson and Rosie (Calvin) Krapu, his mother and father-in-law Harry and Tyyne Carlson, and brother-in-laws Walter Harry, Henry Forsman and Arvo Sirvio.He is survived by: His wife Carolyn Mattson; His daughter Tracy (Brian) LeClaire; His son Michael (Kimberly Knapp) Mattson; His favorite and only granddaughter Leah LeClaire; His siblings Wilbert (Pat) Mattson, Sharon (Roger) Harry, Shirley Harry, Barb Forsman, & Helen Sirvio; His sister-in-law Barbara Mattson; Son-in-law Mike Helms; A special nephew Glenn (Donna) Krapu; Numerous nieces, nephews, and cousins.A memorial service for Roy will be held at 5:30pm on Wednesday, December 22, 2021 at the Memorial Chapel Funeral Home in Hancock with Rev. Brahm Semmler-Smith to officiate. Burial will be held at a later date in the Forest Hill Cemetery in Houghton.Friends may call on Wednesday, December 22, 2021, from 3:30pm until the time of services at the funeral home.To view this obituary or to send condolences to the family, please visit www.memorialchapel.net.The Memorial Chapel Funeral & Cremations Services of Hancock is assisting the family with the arrangements.
To order memorial trees or send flowers to the family in memory of Roy Mattson, please visit our flower store.