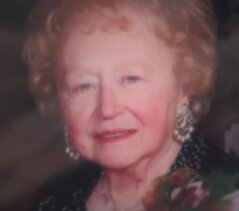 Broomfield, CORuth Ann Juntila Novak, 90, of Broomfield, CO, passed away on May 18, 2021, in Boulder, Colorado.Ruth was born in Hancock, MI to Edward and Sophie Elizabeth Juntila on February 27, 1931. She went to Hancock High School and graduated in 1949. She then studied at Suomi College in Hancock before accepting a position at General Motors in Detroit, Michigan as a Statistical Analyst. In 1954, she married George B. Novak, Jr. of Oak Park, Illinois, raised three children and held several management positions in the hospitality industry.She is survived by her children, Stephen Michael Novak, Dr. Jeanne Marie Novak and Mary Elizabeth Sterling. She is also survived by her only sibling Mary Lou Klein. Her grandchildren include: Kristine Elizabeth Safi, Julie Lorraine Kostic, Paul Michael Novak, Samantha Morgan Ricci, Spencer Henry Ricci and Hayden Robert Ricci. She has a nephew Jeffery Scott Klein and a niece Lara Ann Klein. Ruth is also a great grandmother to William John Cray V, Clara Ann Cray and Athena Marie Novak. She is preceded in death by her parents, Edward and Sophie Juntila and George B. Novak, Jr.Ruth will be laid to rest at the Forest Hill Cemetery in Houghton, Michigan on June 3, 2021, following a blessing at 12:00 PM at the Memorial Chapel Funeral Home in Hancock, MI.The Memorial Chapel & Plowe Funeral Home of Hancock is assisting the family with the local arrangements.
To order memorial trees or send flowers to the family in memory of Ruth Novak, please visit our flower store.