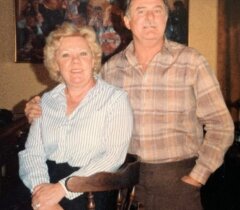 Hancock
Sara Shirley (Nuranen) Wilcox, 92, a resident of Hancock, passed away Tuesday, September 27, at
Mission Point Nursing and Physical Rehabilitation Center of Hancock where she had been a patient over
the past several years. Sara died of natural causes associated with her longtime struggle with
Alzheimer’s disease.
Born July 5, 1930, the 5 th of 14 children born to John and Elizabeth “Bessie” (Waisanen) Nuranen of
Conrad Street in Hancock, Sara graduated from Hancock High School in 1948. She married John H.
Wilcox in 1952 after meeting the Coast Guard Veteran while he was stationed in the Upper Peninsula.
They moved to Southern California where John pursued his career in the oil industry and Sara worked as
a receptionist in the aerospace industry for the Lockheed Aircraft and Fairchild companies. Her beautiful
smile was the first to be seen as she greeted and directed the incoming engineers and designers. It was
said that her voice was mesmerizingly pleasant and professional. In fact, anyone who knew Sara
personally or professionally could not help but be struck by the distinctive quality of her voice and
conversational style. In addition to her love of talking and laughing with her many sisters, friends, and
daughter Teri, Sara enjoyed ice skating, which she began at the Hillside Skating Rink in Hancock near her
family home.
Sara is survived by her daughter Teri (the late Gerald “Jerry”) Gilpin of Rabbit Bay, her brother Robert
“Bert” Nuranen of Hancock, and numerous nieces and nephews. In addition to her husband and parents,
Sara is preceded in death her sisters Rose (the late Albert) Laitinen, Ruth (the late Wes) Kangas, Joyce
(the late Arvid) Nakkula, Sandra “Sandy” Ruscio, Gloria Jerabek, and her brothers John, Calvin, Paul,
Fred, David, James, and Michael.
A memorial service will be held for Sara at 11 am on Tuesday, October 4, 2022 at
Memorial Chapel in Hancock, with Rev Bucky Beach to officiate. Visitation will be held from 10am until 11am.
Immediately afterward, Sara will be buried at the Hancock cemetery next to her beloved husband John
Wilcox who passed away in 2020. The couple had been married for nearly 70 years.
To view this obituary or to send condolences to the family please visit www.memorialchapel.net.
The Memorial Chapel Funeral and Cremation Service - Hancock Chapel is assisting the family with the arrangements.
To order memorial trees or send flowers to the family in memory of Sara Wilcox (Nuranen), please visit our flower store.