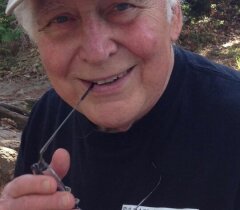 Obituary of Scott V. Rutherford Hancock Scott V. Rutherford Jr., 84, a resident of Hancock passed away Wednesday February 7, 2018, at the Omega House in Houghton. He was born in 1933 in Lansing Michigan. After graduating from Lansing Eastern High School, he attended Dartmouth College, graduating in 1955. He joined the US Navy, serving as an officer with the amphibious fleet in the Pacific. Following his Naval service, he attended graduate school in economics at the University of Michigan, specializing in economic development. Following a brief stint at the Chase Manhattan Bank, he joined the US Agency for International Development (AID) in 1962. Accompanied by his wife and three children, he served for four years as a development loan officer in East Pakistan (now Bangladesh). In 1967 he took a position as a program office at the Economic Development Administration. He was divorced in 1985. He retired in 1986 after 27 years of government service. In 1985 he experienced a spiritual awakening and acknowledged Jesus Christ as his path to salvation. He became deeply involved in the nonviolent peace and justice movement, focusing especially on the unjust US intervention in Central America, especially in Nicaragua and El Salvador, which was taking the lives of thousands of innocent people. He played a role in the organization of projects resisting the US intervention, including a 47-day protest fast by four veterans on the steps of the US Capital and a vigil at a naval weapons station in California. He later traveled to South America to learn first hand about the Latin American liberation struggle and liberation theology. In 1989, he became the coordinator of the Veterans Viet Nam Restoration Project (VVRP), a position he held for 22 years. The VVRP sent teams of veterans to Viet Nam to reconcile with the Vietnamese and to heal the psychic wounds of the war by carrying out humanitarian projects. Scott led over 26 orientation and team building workshops that prepared over 150 veterans for the rigors of the return to Viet Nam. Scott came to the Copper Country in 1986. He was responding to a call from Fight For Justice (FFJ), the dissident group of KIBC members which had occupied the Tribes Administrative Center, to serve as a nonviolent witness and to deter an outbreak of violence. He lived on the reservation for three years. In 1999, he married Joyce Koskenmaki and moved to Hancock. His activism continued. He was a founded of Omega House, a home for the terminally ill, serving as the facilitator of the group that planned and developed the facility. Later he helped in the formation of the Western Upper Peninsula Healthcare Access Coalition and coordinated the FOLK mining education and empowerment project. Scott was a member of the Good Shepherd Lutheran Church, serving six years on the church council. He recently completed a memoir, entitled Testimony, which recounts his experiences of the past 30 years bearing witness to the truth of Jesus Christ and his mission. Scott practiced Zen Buddhism. In his 40s he took up long distance running competing in a number of marathons. He was preceded in death by his older sisters. Marjorie and Lucy. He is succeeded by his beloved wife, Joyce Koskenmaki and his three children, John (Margaret) of Gallup, New Mexico, James of Silver Spring, Maryland and Anne (Harrington) of Wilbraham, Massachusetts, as well five grandchildren and numerous nieces and nephews, and step-children, Maggie Parr of Los Angeles and Andy Parr of Cleveland, Ohio. A memorial service for Scott will be held 4 pm Sunday February 11, 2018, at Good Shepherd Lutheran Church of Houghton with Rev. Bucky Beach to officiate. Friends may call on Sunday February 11, 2018, from 3 pm until time of services at the church. A pot luck dinner will follow the 4 pm service. In lieu of other expressions of sympathy the family suggests that memorials be given to the Omega House 2211, Maureen Ln., Houghton, MI 49931, in memory of Scott V. Rutherford Jr. To view Scotts obituary or to send condolences to the family please visit www.memorialchapel.net. The Memorial Chapel & Plowe Funeral homes of Hancock are assisting the family with the arrangements. Donations may be made to:Omega House2211 Maureen Lane, Houghton MI 49931Tel: 1-906-482-4438Web: http://omega-house.org To send flowers to the family of Scott Rutherford, please visit Tribute Store
To order memorial trees or send flowers to the family in memory of Scott Rutherford, please visit our flower store.