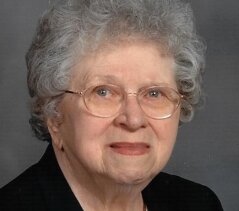 Obituary of Sigrid Aliina Bartelli HANCOCK Sigrid Aliina Ojala Bartelli, 96, a past resident of Cedar Street, Hancock, passed away at the Winona House of PortagePointe on Friday, August 14, 2015. She was born on October 28, 1918, in South Range, MI to Anna (Sivonen) and John Ojala, the youngest of 6 children. She was preceded in death by her siblings Arnold, George, Sulo, Tauno Ojala, and Sofia Bernhardt. Sigrid graduated from Painesdale High School in 1936 and from Suomi College (Finlandia University) in 1938. Her first position after graduation was as the executive secretary to the President of the Federal Land Bank in Houghton at a time when graduates had a difficult time finding positions. While working at the bank in Houghton, she caught the eye of Lindo J. Bartelli, of Iron Mountain, who was working across the street as a Michigan soil scientist with the Farm Security Administration.. On September 6, 1941, she married Lindo, also known as Bart, and became his executive secretary. She typed his doctorial thesis as well as other special documents, entertained his co-workers, and after their daughters were grown, accompanied him as he attended many world-wide meetings. Sigrid and Bart lived in many places during their married life while he was with the Department of Agriculture/Soil Conservation Service: Douglas, Scottville, Ludington, and Lansing in Michigan; Champaign, Illinois; Knoxville, Tennessee; Fort Worth, Texas; and Silver Spring, Maryland. Once he retired as the National Director of the Soil Survey Interpretation, Sigrid insisted that she should be able to pick their next career-stop, and she chose to come home to Hancock-Houghton where they first met 36 years earlier. Bart accepted a position in the School of Forestry and Wood Products at Michigan Tech University. Once again, Sigrid served as his hostess as he became the Dean of the College of Forestry and the Director of the Ford Forestry Center. Sigrid was an active member of Gloria Dei Lutheran Church of Hancock where she served on the altar and stewardship committees. She was a member of the South Range Historical Society, the International Alumni Board at Finlandia University, NARFE, MARSP, Michigan Tech Wives, the Kaleva, and the Miscowabic Club. She was an avid bridge player, crossword puzzle fan, world traveler, and shopper. Sigrid was predeceased by her husband in January, 1995. She is survived by her two daughters: Mrs. Linda (William) Black of Atlanta, GA, and Mrs. Sandra (Tommy) Witt of Columbia, MD. There are four grandchildren: Kara Black of Cary, NC, Christopher Black and his fiancé Jenifer Wiley of Dallas, TX, Molly Witt, from Arlington, VA, Alina Weldon and one great-grandchild, Samantha Weldon, from Woodbridge, VA, as well as many nieces and nephews. Sigrids family would like to express their gratitude to her two caregivers, Mrs. Sandy Beauchamp and Mrs. Mandy Markham, who have spent many hours bringing joy and laughter to Sigrid. In addition, the staff at PortagePointe gave mom four additional years of comfort, medical care and good food once she left her home. The family also extends their appreciation to Gloria Dei visitors and friends and neighbors who brought food and comfort to her when she was alone. Funeral services will be held on Wednesday, August 19, 2015, at Gloria Dei Lutheran Church of Hancock. Visitation will be from 10:00 AM – 12:00 PM and the service begins at noon. Interment will follow at Mountain View Cemetery in South Range. Memorials may be given to Gloria Dei Lutheran Church of Hancock, 1000 Quincy St., Hancock, MI, 49930, or Finlandia University, 601 Quincy St., Hancock, MI, 49930. To view Sigrids obituary or to send condolences to the family please visit www.memorialchapel.net The Memorial Chapel & Plowe funeral Homes have been assisting the family with the arrangements. To send flowers to the family of Sigrid Bartelli, please visit Tribute Store
To order memorial trees or send flowers to the family in memory of Sigrid Bartelli, please visit our flower store.