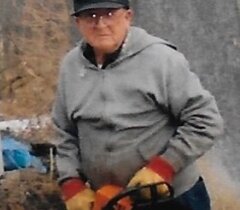 Obituary of Waino J. Niva Sing Sing, Location Waino J. Niva, 92, a resident of Sing Sing Location, passed away Sunday morning March 31, 2019, at the Winona House of Portage Pointe following a short illness. He was born on July 19, 1926, in Keweenaw Bay, MI, a son of the late Waino and Mary (Kaupila) Niva. He attended the Keweenaw Bay Schools. Waino had worked on the Fishing Boats before moving to Detroit. He met Gladys Harju and the couple were married. They then moved to make their home in the Copper Country. Waino had worked in the mines, delivered pop and worked odd jobs until becoming a carpenter and working for Gino Vettori for 13 years. He then worked as a custodian for the Hancock Public Schools retiring after 17 years. Waino was a member of Gloria Dei Lutheran Church of Hancock. He was a jack of all trades and enjoyed working on a variety of projects. He was a gifted woodworker making wooden spoons and restoring axes. He also enjoyed spending time in the outdoors hunting, fishing and spending time with his grandchildren Terry, April, and David. Preceding him in death were his wife Gladys, his daughter Karen OConnell, his great-grandchildren Fredrick Cherubini, Michael Jarvi and Mary Kay Masters along with his parents. Surviving are: His daughters: Gail (John) Masters of Laurium Cheryl (Michael Anderson) Statler of Dallas, TX A special grandson: Terry Niva of Ontonagon His grandchildren: Donna Dover, Jonathon Masters, Patricia Fedd, David Jarvi, Aaron Jarvi, Emilee OConnell, April Baril, Ashley Baril and Alisha (Matthew Jr.) Isaacs. Numerous great grandchildren and cousins Funeral services for Waino will be held 11:00 am Thursday, April 4, 2019, at the Gloria Dei Lutheran Church of Hancock with Rev. Peter Vorhes to officiate. Spring burial will be in the Lakeside Cemetery of Hancock. Friends may call on Thursday, April 4, 2019, from 10 am until time of services at the Gloria Dei Lutheran Church of Hancock. To view Wainos obituary or to send condolences to the family please visit www.memorialchapel.net. To send flowers to the family of Waino Niva, please visit Tribute Store
To order memorial trees or send flowers to the family in memory of Waino Niva, please visit our flower store.