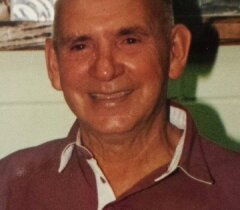 Obituary of Walt Soumis Chassell Walter H. Soumis, 88, a longtime resident of Chassell passed away Saturday morning January 27, 2018, at Bayside Village in LAnse, where he had been a resident patient for the past six months. He was born on April 19, 1929, in Chassell, a son of the late Eugene and Ida (Gibeault) Soumis. Walter was a graduate of the Chassell Schools. Mr. Soumis was a veteran having served with the United States Army Air Corp. On August 25, 1951, he was united in marriage to the former Virginia Hamina. The couple had resided in the Chassell area where they raised their seven children. This past October 27, Virginia preceded Walter in death. Mr. Soumis had worked for Facilities Management for Michigan Technological University and had owned and operated Soumis Greenhouse in Chassell with his wife from 1959 to 1995. Walter was a member of St. Annes Catholic Church of Chassell. He loved to hunt and fish, working around his pond and in the woods. He had a great sense of humor and was a great storyteller and always had a smile for everyone. Preceding him in death were his wife Virginia, his parents and his grandson Gino Zielinski, his brothers & sisters: Elizabeth (Allen) Londo, Eugene (Ella) Soumis, Francis (Hazel) Soumis, Tony Soumis, Helen Jane (Ray) Theory, Marie (Earl) Bowden and Jerome (Irma) Soumis. Surviving are: His children: Pierre (Nancy) Soumis of Gwinn, MI Andre (Gayle) Soumis of Chassell Ann Elliot of Cedar Hill, TX Sandra (Tim) Zielinski of Bella Vista, AR Jane (Brian) Waters of Chassell Gina (Chris) Sayen of Chassell Beth (Tim) Theut of Memphis, TN His grandchildren: Roland, Amanda, Marty, Tony, Chad, Kelli, Ashley, Ginger, McCall, Heather, Olivia, and Dustin 21 Great grandchildren Numerous nieces, nephews, and cousins. A Mass of Christian burial for Walter and Virginia will be held 11 am Friday, February 2, 2018, at St. Annes Catholic Church of Chassell with Fr. Ben Hasse to officiate. Spring burial will be in the Chassell Cemetery. Friends may call on Thursday, February 1, 2018, from 4:00 to 7:00 pm at the Memorial Chapel Funeral Home of Chassell. To view Walters obituary or to send condolences to the family please visit www.memorialchapel.net. The Memorial Chapel & Plowe Funeral Homes of Chassell is assisting the family with the arrangements. To send flowers to the family of Walt Soumis, please visit Tribute Store
To order memorial trees or send flowers to the family in memory of Walter Soumis, please visit our flower store.