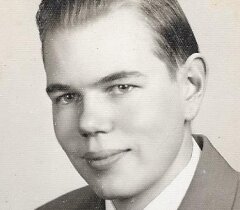 Obituary of Wesley R. Manninen Chassell Wesley R. Manninen, 82, a resident of Chassell passed away Saturday October 24, 2015, at the Cypress Manor Nursing Home in Hancock where he had been a patient of the past month. He was born on March 21, 1933, in Trimountain, a son of the late Edward and Martha (Koski) Manninen. As a child, his family moved to the Detroit area and Wes graduated from Northern High School in Detroit with the class of 1951. Mr. Manninen was a veteran having served with the United States Air Force being stationed in France. On April 6, 1957, he was united in marriage to the former Marilyn Caston. The couple had resided in Chassell, California, Atlantic Mine and since 1975 had made their home on the Chassell-Painesdale Road. Wesley had worked for Kaiser Steel while living in California. Locally, he had worked for Cohodas-Paoli as a mechanic before purchasing Heikkila Auto Parts and starting Wesleys Auto Center, which he owned and operated until his retirement in 1995. Mr. Manninen was a member of Holy Trinity Lutheran Church of Chassell. He enjoyed fishing, woodworking, tinkering with auto projects and spending time outdoors. Preceding him in death were his daughter Mary Ellen, his son Michael and his parents. Surviving are: His wife; Marilyn Manninen a resident patient at the Cypress Manor Nursing Home His sons: David Manninen of Chassell Steven Manninen of Painesdale Ken (Sandy) Manninen of Portage Township His grandchildren: Heather, Holly, April and Cody His great granddaughter: Taylor His sisters: Gladys Perttunen of Walled Lake, MI Katherine (Alan) Briscoe of Troy, MI Numerous nieces, nephews, and cousins Military honors for Wesley will be conducted by the Copper Country Veterans Association at 7 pm Wednesday October 28, 2015, at the Memorial Chapel Funeral Home of Chassell. Burial will take place at a later time in the Woodland Cemetery of Winona. Friends may call on Wednesday October 28, 2015 from 5 to 7 pm at the Memorial Chapel Funeral Home of Chassell. The Memorial Chapel & Plowe Funeral Homes have been assisting the family with the arrangements. To send flowers to the family of Wesley Manninen, please visit Tribute Store
To order memorial trees or send flowers to the family in memory of Wesley Manninen, please visit our flower store.