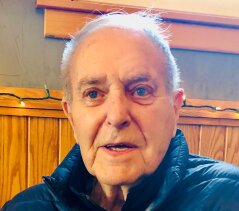 He was born on March 22, 1931, to William and Melba (Michel) Andreini, Sr. He started his life in Baltic, Michigan, and had many cherished memories from his childhood. He graduated from high school after serving in the Korean War from 1950-1951 and was very proud of the four battle stars he earned and the lifelong friendship with his army buddies.

He married Doris Kangas from Baltic on February 28, 1954, and together they had six children. Unfortunately, she died suddenly just as they entered their retirement years, leaving Bill a widower for the past 30 years.

Bill worked at Wagner, as well as Hocking Construction as a foreman while supervising numerous highway jobs and state projects throughout the Upper Peninsula. He then worked for UPPCO and retired after 20 years. He was an excellent welder, mechanic, electrician, and operated every piece of heavy equipment including cranes.

Bill was kind, generous, hard-working, and loved giving his time to help others. He was an accomplished yachtsman and enjoyed his fishing trips to Isle Royale with his friends. He attended flight training school at Michigan Technological University and loved flying Cessna 150s in his earlier years. He also loved hunting and fishing with his family and friends, and they were some of his greatest memories. If you were fortunate to be in Bills company, you heard many stories of his life experiences and knew he had a wonderful sense of humor. Bill was very faithful, always taking time for God and prayer. He was a loyal lifetime member of the Holy Family Catholic Church in South Range and was especially fond of Father John Martignon. He served on the Holy Family Catholic Church Board, numerous committees supporting events, as well as the South Range Village Council.

The family is especially grateful to Kathy, Jeannie, Tony, Jimmy, Mary, and John who remained loyal by helping him the past few years, and thankful to Jenny for cooking many delicious meals.

Bill was preceded in death by his parents, William and Melba, his sister and brother-in-law Paula and Ken Usitalo, brother Delano, his mother-in-law and father-in-law, Esther and Joel Kangas, sisters-in-law Nancy Kangas and Janet Kestner, and two brothers-in-law, Robert and Charles (Herbie) Kangas.

Bills family would like to extend a heartfelt thank you to the staff at the Houghton County Canal View for their compassion and wonderful end of life care. They are also appreciative of the medical care he received over the years from Dr. Janners, the VA Facility, and Sue at Portage Health Home Care.

Bill touched the hearts of many and will be forever missed. The Memorial Chapel Funeral & Cremation Service - Mountain View Chapel of South Range is assisting the family with the arrangements. Online condolences may be expressed to the family at www.memorialchapel.net.

In lieu of flowers, donations may be made to the Holy Family Catholic Church, in memory of Bill Andreini. Jr. or an organization of your choice.

A mass of Christian Burial for Bill is planned for 11:00 am Saturday, May 28,2022, at the Holy Family Catholic Church in South Range, with Fr. John Martignon as celebrant. There will be time set aside to visit with the family one hour before the service. Burial will be in the Mountain View Cemetery in South Range with military rites to be conducted by the Copper Country Veterans Association.
To order memorial trees or send flowers to the family in memory of William Andreini, please visit our flower store.