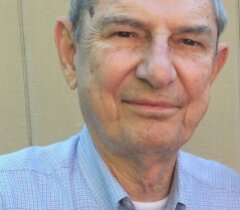 Obituary of William Stephen Brotherton Hancock William Brotherton, 89, a resident of Forsman Rd., Hancock and former resident of Houghton and well-known retired teacher from Houghton High School passed away at his home Thursday morning March 29, 2018. He was born on November 14, 1928, in Baltimore, MD, a son of the late Kenneth and Florence (Cunzeman) Brotherton. Bill grew up as an army brat and moved from city to city with his family, graduating from Fort Knox High School. He then attended Michigan College of Mining and Technology in Sault Ste. Marie, MI, where he met the love of his life, Mina Fritz. He then transferred to the Houghton Campus of Michigan Technological University, graduating with a degree in Research Chemistry. He also received his teaching degree from Northern Michigan University and masters degree from University of Pennsylvania. Mr. Brotherton began a teaching career which lasted 37 years at Houghton High School starting as a chemistry teacher and retiring as head of the math and science departments for the school. He also enjoyed the many years he served as prom advisor. William was a member of St. Ignatius Loyola Catholic Church in Houghton. He enjoyed bird hunting, fishing and working crossword puzzles. After his wife and family, his next love was bowling, Bill had perfect attendance in the local bowling leagues for over 60 years, was the secretary for the Copper Country Bowling League for 50 years and a former president of the league and also a former secretary for the district bowling association. He also enjoyed attending as many Houghton High School reunions that he could to catch up with his former students. Preceding him in death were his parents, his cousin Joe Cunzeman and very good friends Bob & Carol Lowney. Surviving are: His wife of more than 66 years: Mina Brotherton of Hancock His children: Patricia (Tom) Keeley of Hancock Michael (Katharine) Brotherton of Hancock William Benji (Annie) Brotherton of Ahmeek Joan (Ernie) Beutler of Mason Hill Carol (Randy) Little of Houghton Beth Peanut Davis of Brown Deer, WI 26 grandchildren 33 great grandchildren and 1 great great granddaughter In-laws: John Fritz, Joan Reimer and Bruce Fritz. His extended family, the Lowney children: Barb, Nancy, Mary Jane, Bob and Neil. Several nieces, nephews and cousins A Mass of Christian Burial for William will be held 11 am Tuesday April 3, 2018, at St. Ignatius Loyola Catholic Church of Houghton with Fr. John Martignon to officiate. Friends may call on Tuesday April 3, 2018 from 9 am until 10:45 am at St. Ignatius Loyola Catholic Church in Houghton. To view Williams obituary or to send condolences to the family please visit www.plowefuneralhome.com The Memorial Chapel & Plowe Funeral Homes of Houghton have been assisting the family with the arrangements. To send flowers to the family of William Brotherton, please visit Tribute Store
To order memorial trees or send flowers to the family in memory of William Brotherton, please visit our flower store.